Len's life mission is to use oral, written and visual communication with equal effectiveness in telling the story of Jesus Christ. He is a “master wordsmith and communicator,” “creative master,” “thought leader,” and according to one Fulbright scholar, “captures the future of language.”

Len is Executive Director of Invite Resources and Director of Innovation and Strategy at St. Andrew United Methodist Church in Plano, Texas. Len is formerly the Senior Leadership Editor at Abingdon Press, the main imprint of the United Methodist Publishing House. A pioneer in the use of visual media and storytelling in church life, Len first practiced his calling as a 24-year old Media Minister, leading the creative arts ministry of Ginghamsburg Church, one of the great stories of late 20th century United Methodism in America.

Len has served as a creative director, teacher, speaker, consultant, and coach. His ministry has helped thousands of churches to more innovative ways of doing ministry through ministries he has co-founded and led since 1996. Len has been writing since age 13 and published his first work at age 16. Greater Things is his eleventh published title. Other works include Think Like a Five Year Old, Taking Flight with Creativity, and The Wired Church. As a producer and director of dozens of short films, Len has won Silver and Bronze Telly Awards, and interned at CBS Television City in Hollywood, CA. Len’s maintains an active professional blog at lenwilson.us, which is known for its annual list of the fastest growing congregations throughout Methodism. 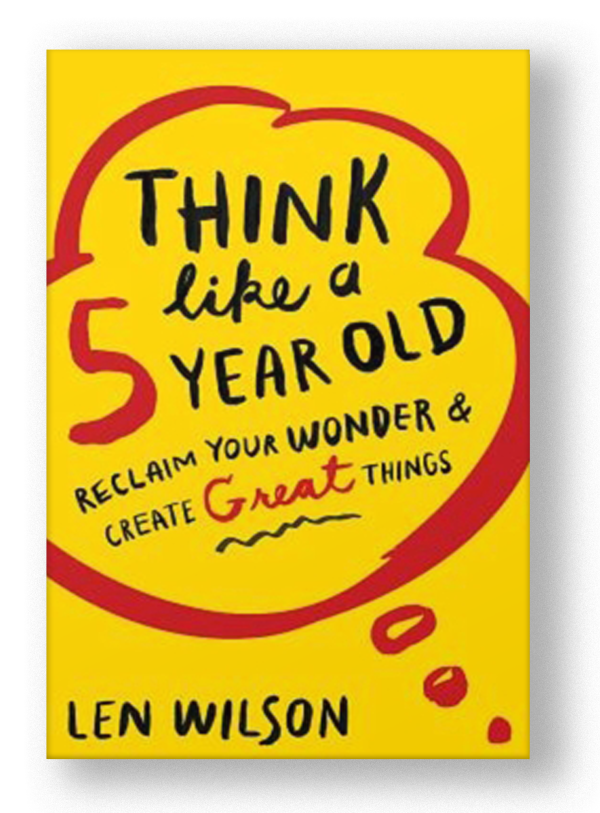 According to a recent Gallup report, only 13% of people are "actively engaged" in their jobs, 63 percent merely put in their time, and the remaining 24% are actively disengaged. People are bored at work, at home, in personal habits, and in their spiritual lives. Over time a pattern of loss in vitality and a shift towards fear, comfort, and consumption is leaving them feeling unfulfilled and less creative.

Wilson proposes that every person is called to a life of creativity. This means knowing how you are made, reclaiming your passions, learning the craft of creativity as an act of faith, and surrendering the creative process to God.

"Having been made in the Creator God's image, we are born creative, yet we tend to agree in theory but disagree in practice," notes Wilson. "Respected creative thinkers such as Sir Ken Robinson, Paul Torrance, and Seth Godin offer insights, but the problem is that while everyone has this supernatural power within them, they've lost sight of it. They've given in to forces that steal and destroy our innate joy. We don't feel creative--and consequently, we don't feel fulfilled."

Wilson redefines the word "creativity" using a framework of categories such as compassion, problem solving, engineering, and artistic expression. Creativity is about being attentive to and acting in response to the combination of ideas and reactions and preferences that form one's view of the world. This perspective, this unique form of expression, is the identity given to them by God and the origin of their creativity.

I can’t recommend this book strongly enough. Len Wilson’s work is not only significant and inspiring, but critical for our society in this time. His insights are especially important for church leaders as we attempt to discover how to make the Gospel message authentic in our ever-changing and isolating landscape. Spirituality and creativity cannot be separated. We all need to be called again to become childlike in our faith, our imagination and our sense of wonder and possibility that we may recapture the creativity the Creator placed in all of us.

Creativity is critical to most endeavors, yet at times in everyone’s life, and in every organization, the wellspring runs dry. Len Wilson’s book is a gift that will inspire and foster creativity. Filled with terrific examples, this book will benefit leaders and teams in any line of work.

I love this book so much. As a pastor and counselor, it has always burdened me to see a person stop taking risks, stop creating, stop living life to the fullest. God is a Creator God and we are made in His image. Thank you Len for encouraging us to dream again!

In a world encumbered with dull and gray, Len Wilson offers us a brilliant, technicolor future by inviting us to harness our unique, God-given creativity. As creatures made in the image of God, each one of us has untapped ingenuity yet to be expressed. This book is for anyone who wants to tap into this well of imagination.

Think Like a Five Year Old invites us to take a bold, surrendered risk into a more creative, fulfilling life.

This remarkable book is for all of us who long to recapture the wondrous creativity we once took for granted. Len Wilson draws from inspiring stories of real people who fought the battle for divergent thinking and practiced the disciplines required to innovate. I highly recommend this practical and inspiring work, and plan to give it to my artistic daughters. The future belongs to Christian innovation.

The turmoil at the dawn of the 2020s is not an anomaly, but best understood in the context of a larger sea change that has been growing for the last generation. If the world is truly ending, then all is moot. But we would be wise to explore the alternative: instead of the end of the world, perhaps we are living through the birth of a new era.

It is impossible to go back in time and space to where we were before the pandemic began. The old ways are done; now it is time to build. Restoring culture requires innovation. But innovation has been a trending idea for a generation and we are no better off.

What our culture desperately needs is not just innovation, but Christian innovation.

Christians do not have a sterling reputation for new ideas, noteworthy solutions, and needle-moving systems. For the last two thousand years, real change that creates flourishing societies has often come through the work of Christians. Over and over, followers of Jesus have demonstrated a supernatural ability to build culture and create opportunities for human flourishing. Jesus has a simple name for this: greater things.

Christian innovation is what happens when Christ’s people leverage their creative gifts and allow themselves to be used by the Holy Spirit through the work of Christ’s community for the inauguration of God’s purpose.

This book is an exploration of the implications of Jesus’ promise that we can do greater things. Its goal is to define and make simple the idea and process of Christian innovation. This groundbreaking work offers a means by which anyone can move to the forefront of positive societal change.

The time to tear down is done; now it is time to build. Learn how to do greater things today.

Sometimes a book comes along and it is clearly the book for this moment. Greater Things is just that book for Christian leaders today. Len Wilson, a trusted innovator, and an accomplished practitioner takes us on a journey to better understand where we are at and where the Spirit is leading.  If you have felt stuck in ministry or are looking for ways to use your creativity for God’s Kingdom, this is the book for you!

Every now and then a book shoots across the sky like a bolt of lightning, cleansing the air, clarifying the subject matter, silhouetting the challenges, and lighting up the horizon for new vistas and ventures. Len Wilson’s Greater Things is that rare, out-of-the-blue bombshell of a book that will electrify anyone concerned about innovation, creativity, and imagination in the church.

Best-selling author of over 60 books, distinguished visiting professor at five colleges and universities, and found/president of SpiritVenture Ministries, PreathTheStory.com, and The Salish Sea Press.

Greater Things gets to the heart of innovation from a deep, holistic biblical perspective. This is really great, theological writing. Truly a much-needed reading for connecting to God's next!

This is the best book on Christian innovation I've ever read. For too long the Western church has blindly embraced the ideology of progress as our core narrative. Through faithful and penetrating Scriptural engagement, Len replaces the common adoption of "creative destruction" with a proper theology of "new creation." This is not simply a book; it is a hitchhiker’s guide to the future for church teams desiring to explore Christian innovation.

In Greater Things, Len shares so much wisdom on Christian innovation and what it truly means for Christians to be the work of the new creation. Len’s passion and creativity are so evident on every page, it’s motivating me to continue to think outside the box, take risks, and bring my ideas into community like never before. Let’s make 2022 and beyond a new era of Christian innovation and growth. Reading Greater Things is the perfect place to start.

“Innovation” is a common term in today’s society. For some Christians, the notion of innovation can bring anxiety, especially when compared with an “old-time religion” that feels so comfortable. We need a guide with a love for the Church and experience in Spirit-led innovation. Fortunately, Dr. Len Wilson is this person. In Greater Things, this pastor, entrepreneur, creative, and innovator provides a map to guide the Church in adaptation and innovation, which are critical for the future. This map provides Christians with trail markers for designing a way forward. As a professor I can confidently state this book will become required reading in our degree program.