As I write this, the Union Flag and all other official flags of the United Kingdom are flying at half mast in honor of the death of Queen Elizabeth II.  For those who need to know, the official government website of the UK published a list of rules regarding how to fly the flags properly. There are lots of rules.

One thing to clarify, especially for my fellow Americans, is that the Union Jack represents the United Kingdom, which is a kingdom of multiple nations. The “official flags” designation above hints at the relationships when it includes all nation flags of home nations of the United Kingdom, Crown Dependences and Overseas Territories, Ensigns, and so on.

Here in the states, we threw tea. Now, almost 250 years later, it’s hard to understand the significance of the flags and the relationships they represent. Our forebears shook off dependence on the constitutional monarchy of King George.

Yet, based on my anecdotal observation, it seems we Americans continue to find the workings of the monarchy fascinating. Perhaps this is because while government for us represents a document, government for the British is a person. While we look to a document for governance (most of the time), citizens of a monarchy look to a person. Indeed, “mon-arch” literally means “one-authority.”

Of note in the UK flag flying rules is that there is one flag that does not fly at half mast during the transition from one ruler to another. This is the Royal Standard. The royal standard heraldic flag represents the sovereign and the kingdom, or the person and the nation. The flag moves with King Charles, and cannot be separated. As King Charles travels about, from palace to car to aeroplane, preparing for his mother’s funeral, the flag follows him. It goes where he goes. Kingdom is king.

This image is critical to understanding the biblical metaphor of kingdom. Kingdoms are one of the earliest types of societies on earth, dating back to before humans began to write things down. For thousands of years, writers and readers have intuitively understood how kingdoms work. When Jesus talked about “his kingdom,” the metaphor he was using evoked a set of images and connections which could be understood by his listeners.

In fact, we modern Americans, with our pursuit of happiness, may be uniquely ill-equipped to understand the image-rich significance of “kingdom.” We downplay the role of the king and seek individual autonomy. In the church, some more progressive authorities now even dismiss “kingdom” language altogether, opting instead for the coined word “kin-dom” as an alternate metaphor for the age, which aspires to individual liberty and equity in community.

Yet Jesus stuck with kingdom—in part because of the question of authority. While in a modern democracy, authorities lies with each individual, in a monarchy, authority lies with a single ruler. In God’s Kingdom, this ruler is Jesus. “All authority on heaven and earth has been given to me,” says Jesus, as quoted in Matthew 28:18. So kingdom is king, and the king is Jesus. Jesus is in charge.

What does this mean for us? Redefining our understanding of the kingdom resets our view of the end. Once we change the end, everything we do today is effected.

Much of modern Christianity is built on the notion that we are somehow creating or participating in the emergence of God’s Kingdom, and that it is our responsibility to help create the future kingdom we so desire. This vision of God’s kingdom places it in the future, and asks us to take on authority to make it happen. A recent book by World Vision CEO Richard Stearns makes this exact claim, that the kingdom is “unfinished” without our participation. Activity on both the left and right side of the aisle shares this assumption: we are either “advancing the kingdom” through our good works for the least of these, or we put policies and people in position to ensure the theocratic authority of the state to act on behalf of God’s kingdom.

Neither have worked, and it’s not hard to make the case that in fact, things are getting worse. The problem is that we have the wrong view of the end. When we make “kingdom” the end, we set ourselves up for all sorts of false, tragic endings. More than ever, it is vital for us to have the right end in mind. The end is not the kingdom. The end is God’s presence.

Think of it this way. So kingdom is king, and the king is Jesus. But where is Jesus? Is he gone, in a cloud, set to return at a future date? This is what some believe. Or, is he risen today, alive and in our hearts through the power of the Holy Spirit?

Jesus is the all-time reality and a full-time presence in our hearts. Thus, since kingdom is king, this means that the kingdom is also present. It is not unfinished; in fact, Jesus declares that indeed, at the cross, he finished the work of his Father. The job was over—in dying, he had conquered death, done what he needed to do, and inaugurated the kingdom. The result is that God raised him up, so that every knee should bow, in heaven and on earth and under the earth, and every tongue acknowledge that Jesus Christ is Lord, to the glory of God the Father. (Phil 2:9-11)

Telos is the much underreported Greek word, used hundreds of times in the New Testament, that Jesus uses to describe our final state of being. Technically, it means “the end.” But is much more than a cessation of activity. Telos is fulfillment, completion, and command—telos is denouement, the recapitulation of the story as told in Genesis 1-3, and the final active state relationship of humankind in the presence of God. It is the hope of heaven today—not just in the future, but now. 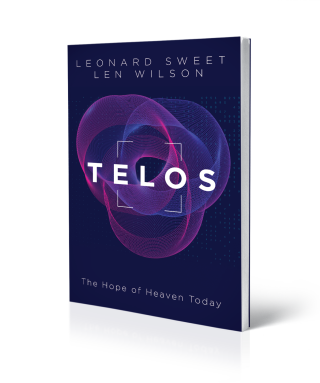 For more on these ideas, pre-order Telos: The Hope of Heaven Today by Leonard Sweet and Len Wilson.